Certified Hip dysplasia is a very common disease, sometimes seen in specific breeds. Penn HIP Certification has been shown to be the most reliable indicator of future hip osteoarthritis. In order to ensure only the best dogs are used for breeding, passing on their healthy hips, we offer Penn HIP Certification.

In order to certify your dog’s hips, we will need to quickly anesthetize or sedate your pet for radiographs (x-rays). In addition to traditional hip-extended radiographs, we use a special device to hold your pet in position and retract the legs/hips in order to produce radiographs that will allow radiologists to measure the displacement of the femur in your pets’ hips (Compression and Distraction radiographs). These measurements (Distraction Index – or DI) provide a way to predict hip laxity, dysplasia, and osteoarthritis. The lower the DI, the tighter the hips. For more information, ask your pets’ veterinarian, or visit www.pennhip.org. 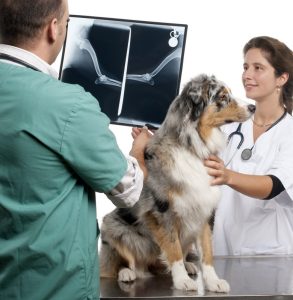 Here at Quartz Mtn. Animal Hospital, we are proud to offer OFA radiographs for our patients.

OFA radiographs are used to evaluate the hips of a dog. They are usually taken after a dog’s second birthday. They are mostly done for owners who are considering breeding their dog. If the hips pass, the puppies are often more valuable. Sometimes, if they don’t pass, owners may decide not to breed them.

Positioning is very important to ensure good OFA radiographs. The American Veterinary Medical Association has strict guidelines on how the films need to look so we work very hard to take the perfect films. Though it is not required, anesthesia is recommended so that we can achieve the best results possible.

It is very important that owners fill out the paperwork as thoroughly as possible. You need to know your pets’ registered name, tattoo or microchip, and even the information about the sire and dam. A signature is necessary.

If you have any questions about OFA radiographs or you would like to schedule an appointment, feel free to contact us today at (480) 860-1433.

Responsible breeders are always trying to reduce the risk of hip dysplasia in their dogs blood lines. One way to achieving this goal is to have an accurate test for susceptibility to this disease. A recent study attempted to look at the differences in the two most common tests.

Currently the test regarded as the “gold standard” used to determine a dogs susceptibility to hip dysplasia is the Orthopedic Foundation for Animals (OFA) hip joint scoring system. This system rates a dogs hip joint on a seven-point scoring system. The test relies on interpretation of a radiograph of the dogs hips, which are then assigned a score by three independent radiologists: Excellent, Good, Fair, Borderline, Mild, Moderate and Severe (Click here to read an explanation of each score).

Another, more recently developed test, is the University of Pennsylvania Hip Improvement Program (PennHIP) test. Unlike the OFA test, PennHIP requires the dog to be anesthetized. Three radiographs are taken to measure the hip joint laxity. A score between 0-1 is assigned, with 0 being very tight hips and 1 being very loose. The test is not pass-fail, and the score is actually based on a measurement of the hip’s distraction index (DI).

According to the organization, “the DI is an indication of the ‘percent out of joint’ that the femoral head is displaced from the acetabulum.” So a DI of 0.15 means the femoral head is 15 percent out of joint (a tight hip), and a DI of 0.77 means the head is 77 percent out of joint (a pretty loose hip). The index is measured using circular gauges that are placed over the films, and the final number reflects factors such as the size of the dog and how it compares to the rest of the population. This method generally defines a DI of ≥0.30 as “osteoarthritis-susceptible,” and a DI of ≤0.30 as “osteoarthritis-non-susceptible.”

Pros and Cons of PennHip and OFA Hip Radiographs: Review for Vet Students

There are two methods commonly used to evaluate the hips of young dogs: PennHip radiographs and the Orthopedic Foundation for Animals (OFA) hip radiographs. Each of these methods has unique pros and cons.

This study suggests that PennHip radiographs are more sensitive than OFA hip radiographs, although both methods are still utilized in practice.

The PennHip technique was developed by Dr. Gail Smith, an orthopedic surgeon from the University of Pennsylvania. For these radiographs, the dog is anesthetized and a total of three images are taken, the most important of which incorporates a uniform force applied to the hips using a distraction device.

Unlike PennHip radiographs, OFA radiographs do not require any specialized training, devices, or positioning. OFA hip radiographs are performed using a standard ventrodorsal view of the pelvis. The dog is placed in dorsal recumbency with the rear limbs extended and parallel to each other, the stifles rotated internally, and the pelvis symmetric. This is a common technique for performing radiographs to evaluate the hips and pelvis.

Both PennHip and OFA radiographs have their unique pros and cons. While PennHip radiographs are more sensitive for the detection of hip dysplasia, OFA radiographs may be more convenient for the veterinary practice and more affordable for the client. Ultimately, the decision of which radiographs to perform will depend upon the client’s goals and budget.

Get In Touch With Us Today